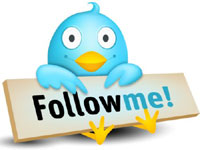 Answer: When first starting out on Twitter it's common to feel like you are literally tweeting into an empty room. As with any medium, it takes time to attract and cultivate an audience (in your case followers) who are interested in what you have to say via "tweets."

Don't worry you're not alone. In fact, it's been reported that 71% of all tweets you send are probably ignored. This means that Twitter is really a numbers game — the more you update, the better chance you have to attract notice and followers to your account.

Unfortunately, in your case, you are only updating 3-4 times a week; you probably aren't generating enough regular content necessary to illicit much of a response. Since the average Twitter account has just over 100 followers these days, your pedestrian total of just less than 25 after a few months is definitely something you need to proactively combat.

The good news is we can help. SEN has on staff several Twitter superstars who have follower counts higher than most average American cities. One in particular is guest writer and Twitter Evangelist Travis Wright whose account @teedubya has over 148,000 followers. His tweet-fu is strong!...