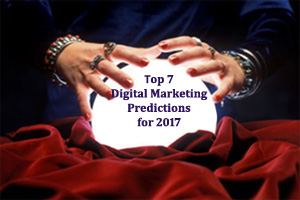 If the digital marketing year of 2016 could be viewed in an anthropomorphic sense, it would be the Grim Reaper. From Google to Facebook to Yahoo and everyone in between, the underlying theme of last year was one of change and bottom-line carnage!

Google pushed through a record number of manual penalties in 2016, first with recipe plugins, then with blogger outbound link penalties, then widgets, until finally ending the year with a notice that a crackdown on mobile intrusive interstitials was coming. It also announced the introduction of a mobile-first index, rich cards, Progressive Web Apps, and continued to push AMP and HTTPS migration adoption.

Facebook continued its meteoric stock rise, its stock finished up 18% and new users up 16%. As of the end of 2016 a full 23% of the entire World's population now logs into Facebook at least once a month. However, the company was savaged for its plummeting Facebook page reach (now down to an average of 2% for each post) and for the incredible number of engagement measurement errors they were providing advertisers.

Yahoo fared the worst in 2016. It started the year by axing 15% of their workforce, then had to fight off an activist shareholder revolt, before ending t...