Unraveling the Benefits of the Ever-Versatile QR Code
What they are, where people are using them and how to create them for free. — by John Heard 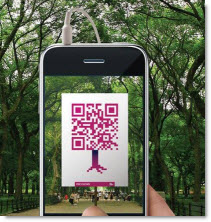 Quick Response Codes (QR Codes) are a 2 dimensional matrix barcode with its origins in the Automotive Industry. It was originally designed for high speed decoding, like on an assembly line and is quickly making it's way into mainstream marketing. You can find them on thousands of signs, business cards and even tattooed onto a handful of brave souls.

This sudden growth in popularity can be attributed to the addition of QR Capable Bar Code Scanners in smartphones. Now it's a common and very efficient way to link print media to the mobile Web. In fact in a 2010 Mobio Study, it was reported that QR Code scanning grew at 1200% in late 2010 prior to the Christmas shopping season.

It's also important to note that QR Code technology, invented in 1994 by Denso Wave Inc., is free from any license. Denso Wave owns the patent rights, but does not exercise them, allowing anyone to make use of the technology. The term "QR Code" however, is a registered trademark of Denso Wave Incorporated. This all translates into a wide variety of free apps for creating QR Codes.

Another great feature of QR Codes is their built in error correction and versatility. Even if a QR Code is damaged, it's possible for it to be read without errors. Take for example the QR Code to the left. We overlaid the SearchEngineNews initials in the center of the code, and it still works for storing the www.searchenginenews.com URL.

QR Codes can also hold much more than a common URL. Depending on the version, character set and error correction levels ev...