Does Negative SEO Exist? Can a Competitor Harm You? Yes!
by Casey Markee

Does Negative SEO Exist? Can a Competitor Harm You? Yes! 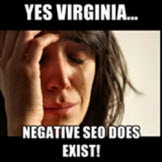 Answer: First, let's discuss those notices from Google. We initially noted Google stepping up unnatural links notices through Webmaster Tools accounts back in August 2011. However, as we recently noted on our Search Engine Newsroom Experts Blog, Google has really opened up the floodgates on these notices in 2012. In fact, by our latest estimation, Google has sent out somewhere in the neighborhood of 80,000 of these as of this writing.

These notices, for the most part, appear to be automated. In fact, we have confirmation from several clients that even after receiving these notices, no observed ranking detriments were observed. In other words, the vast majority of these notices appear to be warnings that Google has detected some suspicious links and that you may be the subject of a penalty if you continue doing what it is you are doing.

In your case however, you appear to have received one of the more serious notices with actual indications of noted suspicious links and were assessed a penalty until these links are addressed at your end via a reconsideration request. The question that exists is: did you have anything to do with these links? Per your question, a...