OMG! Here Comes A Whole New Can Of Black-Hat Whoopass!
by Stephen Mahaney

OMG! Here Comes A Whole New Can Of Black-Hat Whoopass! — by Stephen Mahaney 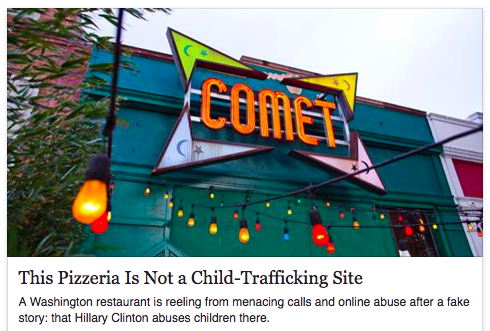 Imagine that one of your clients owns a pizzaria in a big city suburb. Inexplicably their phones light up with angry callers spewing hate and threats. Their facebook page becomes suddenly stuffed with messages promising a litany of violent actions. Then, out-of-the-blue, some guy with an assault weapon fires off a couple of rounds inside their establishment!

Crazy you say. Yes!
Impossible? ...well, no. In fact this actually happened.

Well, it seems that some people believe everything they read – especially when it supports what they want to believe.

In case you haven't heard, I'll bring you quickly up to speed. Just prior to the election a (seriously ridiculous, highly unbelievable) series of fake news stories began circulating with the claim that Hillary and her minions were trafficking children out of the backroom of a D.C. area pizzaria. The reports included a cornucopia of wild and lascivious details – all completely fabricated and totally unbelievable to anyone with more than two brain cells sparking together. But that didn't seem to matter to the callers, the posters, or the gunman.

So, what's this have to do with SEO?

Over the past 20 years of doing this, we've seem some pretty aggressive tactics used to handicap or damage a competitor's reputation. We've learned not to underestimate the truly nefarious black-hatters who'll go to any length to sabatoge a target if there's an incentive to do so and the means to ...