Do NOT Ignore Bing! Top 5 SEO Tips to Dominate
by Casey Markee 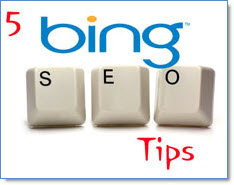 Answer: Earlier this year at SMX West in San Jose, CA, Bing Program Manager Rangan Majumder stated that Bing uses what he calls Ranker Magic to return results to its users. He then elaborated by saying that Bing's new "SEO formula" could be described as the following:

Basically, what the above states is that the returned rank for a result in Bing is now highly personalized to the point that NO two users should be seeing the same results. Ranking well in Bing is thus a combination of three unique aspects: geographic preference, on-page quality match, and social signals.

In fact, even more so than Google...

Bing is providing geo-focused results that are now more heavily influenced by a user's past search history AND social interactions than just link authority.

In other words, the highest ranking site in Bing may not always be the one with the best backlink profile. Instead, it very well could be the one that is either the closest to the user or which was most recently shared by their Facebook friends.

Nevertheless, to best position your sites in Bing for optimum rankings in 2012 and beyond here are five important SEO optimization takeaways: