How to Increase your Facebook Organic Reach: 7 Strategies that Work!
by Casey Markee

How to Increase your Facebook Organic Reach: 7 Strategies that Work!

Answer: Facebook has made very few friends since they tweaked their internal algorithms back in 2012 and again noticeably in December of 2013. As reported by AdAge from a sales deck obtained in last 2013 Facebook was upfront about what was coming in 2014:

"We expect organic distribution of an individual page's posts to gradually decline over time as we continually work to make sure people have a meaningful experience on the site."

However, few would have predicted that these changes by Facebook, initially intended to weed-out spammy non-engaging content from the average news feed, would result in such an incredible loss in overall organic reach for most brands. For example, in April 2012 brands were reaching on average 16% of their total fan base per update. By early 2014 that number was in the single digits and was unofficially being confirmed as targeted policy by sources within Facebook and by power users on Twitter. 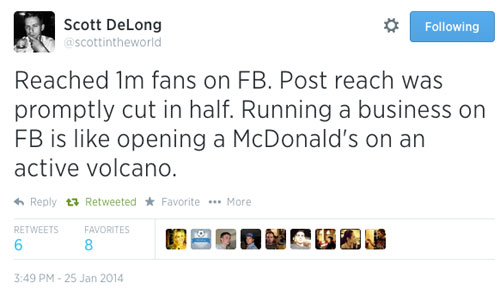