Not using Instagram to grow your Brand Exposure? Big Mistake!
by Casey Markee

Tips to best leverage Instagram to promote your services and products more effectively...
Not using Instagram to grow your Brand Exposure? Big Mistake! — by Casey Markee

With Facebook recently completing their acquisition of Instagram for just around $1 billion and the fact that current Instagram users number around 80 million, it's now impossible to overlook Instagram as a viable channel to promote your products and services.

In fact, many of the world's biggest and most renowned brands are already using Instagram. Social media analytics company Simply Measured released a report in August that showed 40% of the world's top 100 brands were already using the site to increase their brand awareness and further connect with the large consumer bases. In comparison, these same brands were using Pinterest at a 51% clip and Twitter and Facebook at around a 95%+ rate.

The above comparison is important to note since Instagram is projected to hit 100 million users by the end of 2012 after only two years in operation (a milestone that took Facebook four years and Twitter five years to reach). 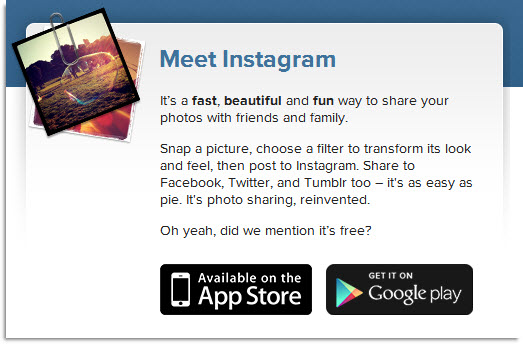 For those that aren't familiar with Instagram, Instagram is a free app for either iPhone or Android that allows users to take pictures, apply one of several custom filters to change the look of your photos, and then share these photos on one of several networks (Twitter, Facebook, Foursquare, Tumblr, & Flickr).