Run a Twitter Hashtag Campaign to be Remembered!
by Casey Markee 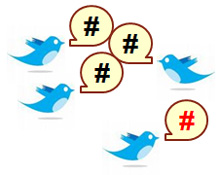 Answer: Hashtags (#) are a great way to brand a campaign, generate buzz, promote a new product or service, drive live tweets to an event, or just drive new followers. Your client is right to want to embrace this form of Twitter marketing.

Most people are familiar with hashtags but by adding a # in front of a word or group of words with the spaces taken out you turn them into searchable keywords that can be organized and classified by Twitter into stacked results. In turn, these stacked results are viewable when anyone on twitter searches for your hashtag. The result? You can start, direct, and monitor a themed discussion around a specific topic that can be tracked in real time.

Examples of recent well-known hashtag campaigns include the notorious #McDStories hashtag, which was launched in January, 2012. This campaign was initially designed to encourage heart-warming stories of McDonald's experiences but went quickly out of control and resulted in users sharing horror stories bashing McDonald's and their unhealthy food offerings. Ten months later, it's still trending strong.

Another is the #NBCFail hashtag that was started during the London Olympics last summer to bemoan the tape delays and at times laughable commentary provided by NBC sportscasters. ...