Set up your own Twitter RSS Feed. Here's How!
by Casey Markee

Set up your own Twitter RSS Feed. Here's How! 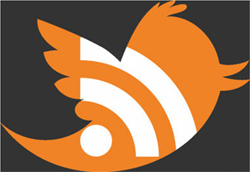 Answer: Nope, it's not just you. In fact, Facebook, YouTube, Twitter, and other popular social sites have continued to make it more difficult to find user RSS feeds. It's to the point now that unless you are a true geek, finding these so-called "public" feeds is almost impossible.

Worse, Twitter has said that they will stop support for RSS, XML, and ATOM feed formats in March of 2013, advocating users to switch to JSON or some other API method before that date.

Fortunately, we've got you covered. At least for the time being, you can access an RSS feed of your most recent activity at a sample URL like the below.

Next, if you are looking for RSS specific feeds for favorites, mentions, hashtags, or lists try these: