4 Quick Steps to a Faster WordPress Site
by John Heard

How we trimmed 64 Seconds off a WordPress Site's Load Time Without Breaking a Sweat! 4 Quick Steps to a Faster WordPress Site — by John Heard 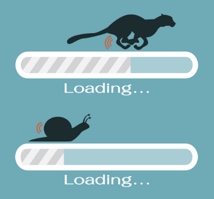 WordPress, the de facto standard CMS (Content Management System) of small businesses and SEO's, is a very powerful but easy to screw up piece of software. Somewhat similar to a brand new smartphone, it's incredibly fast out of the box, but as you keep adding more and more apps you start to notice it slowing down and acting up at times.

One of WordPress' strengths is its third party support network where developers have released thousands of handy plugins and themes allowing you to customize it to the nth degree. Unfortunately, as we've all sadly found out, SPEED is an afterthought for many developers at best. On one hand, you have WordPress core themes, the ones that ship with the WordPress installation which are quite fast and on the other hand you have all kinds of custom themes available varying from fast to very slow. Sadly, custom theme developers typically try to throw every feature they can dream up into their themes making most extremely bloated and slow. Over the last few years developers are starting to get the concept of fast loading websites and we are starting to see more high performance themes available.

When our team here at SEN started to spend more and more time troubleshooting the extent of this problem for many of our members, it was a no-brainer to write an article on the topic. We needed a slow, unoptimized site for an example, and I just happened to have one. Just like the plumber with leaky pipes, my johnheard.com site has been overlooked for years while I worked on customers' sites and was created with complete disregard for load time. This has been a just a "for fun" site that I use occasionally to test a new idea or plugin, but now we have a reason to give it a much needed tune up for speed.