When Alt-Text is a Story in The NYTimes, THAT's Your Wake-Up Call
by Stephen Mahaney

When Alt-Text is a Story in The New York Times, THAT's Your Wake-Up Call — by Stephen Mahaney 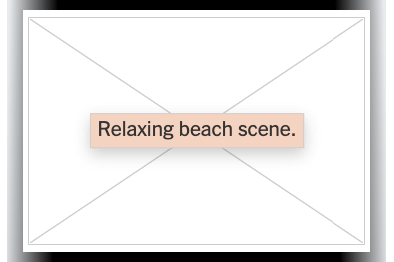 When something "new" (but not new) becomes a story in The New York Times, you can bet your grandma's false teeth it's about to go mainstream!

Yep, that's the same alt-text that all of us SEOs are so familiar with — even though it's been virtually unknown to the general public, until now.

The story in The NYTimes titled, The Hidden Image Descriptions Making the Internet Accessible starts by visually displaying empty image text boxes (like the one shown above) to explain that "Many people rely on text like this to navigate the internet."

As the article points out,

The text boxes ... are examples of alt text, which people who are blind or have low vision often rely on when navigating the web. When it’s available, the text can be detected and read aloud or translated into Braille through screen readers, assistive technology that can be accessed in the form of software programs, apps or even browser extensions. For these users, alt text is essential to the online experience.

Of course, if you've been paying attention to SEN over the past year or so, you know we've been alerting you to the growing concerns facing websites regarding ADA accessibility and compliance. As we pointed out in these two recent artic...