Help! My PageRank just Dropped from 6 to 3. Did I get a Penalty?
by Casey Markee

Help! My PageRank just Dropped from 6 to 3. Did I get a Penalty? 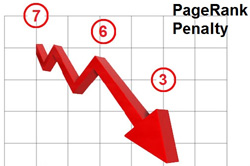 Answer: What a lot of people don't understand about PageRank, especially Toolbar PageRank, is that it is HORRIBLY out-of-date. The PageRank that you see in your browser and in your client's browser is a minimum of 3-6 months old. So to say it's unreliable or stale, or even useful (when evaluating how your site 'truly' ranks online these days), is up for substantial debate.

It's also estimated that Google uses well over 200+ algorithmic ranking factors, continuously, to determine how a site will rank competitively. With that being said, even when there is a regular PageRank update (and they are becoming more and more infrequent) a PageRank drop from 6 to a 3 is clearly not normal.

In your case, you stated that you did not receive a notice in the client's Google Webmaster Tools account but have tracked drops in both keyword rankings and traffic levels. On first-glance, this certainly could imply some kind of penalty. However, to fully determine that you need to conduct a site audit first and ask yourself the following questions: