Yet another update hit Google's global search results on August 1st and, although Google claimed it was just another general core update, it quickly became clear that specific industries were hit harder than others. The industries most affected included the Health and Medical industry as well as Your Money Your Life sites, which Google defines as sites that can 'potentially impact the future happiness, health, financial stability, or safety of users'. Because these industries saw the most movement within the search results SEOs quickly nicknamed it the Medic Update.

Again, when questioned about this update, Google's message was consistent with its previous advice concerning core updates this year and that's to make your site better for your users and that there is no other 'fix' if you've been affected. They also went on to say...

As with any update, some sites may note drops or gains. There’s nothing wrong with pages that may now perform less well. Instead, it’s that changes to our systems are benefiting pages that were previously under-rewarded.

Google did take the time to announce the algorithm update via Twitter: 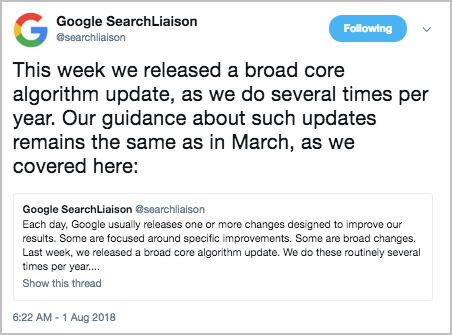 As you can imagine, this most recent update was a big topic of discussion during SEN's August MasterMind Meetup with both John Heard and Mary Bowling sharing deep insights. You can listen to the full recording of the meeting here and here are some of the major points they covered: