A Year in Review: Top 7 Digital Marketing Predictions for 2016
by Casey Markee

A Year in Review: Top 7 Digital Marketing Predictions for 2016 — by Casey Markee 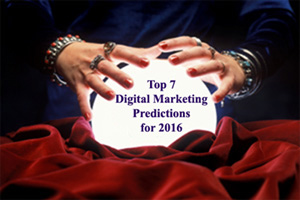 To say that Google took users on a wild ride in 2015 would be an understatement. It's not exaggeration to say that this past year may have been the single biggest period of upheaval and change in recent digital marketing history.

From the launch of the mobile friendly algorithm, to several Phantom Quality updates, to a 28th Panda Update in July, to the relative death of Google Plus as a social network, to the birth of Google as a subsidiary of Alphabet, to the unveiling of RankBrain, 2015 was anything but boring for the average SEO.

Mobile, as we postulated in last year's 2015 Digital Marketing Predictions article, continued to be the main focal area of Google in all matters. Not only has Google made it clear that mobile-optimized pages will rank higher in search, but their planned launch of Accelerated Mobile Pages (AMP) in February 2016 could...